When buying Tanzanite jewelry online, while you may be limited from a physical inspection of the gemstone, there are ways that can help you pick the right Tanzanite for you. The first thing you need to know is to note that not all blue gemstones are Tanzanite. 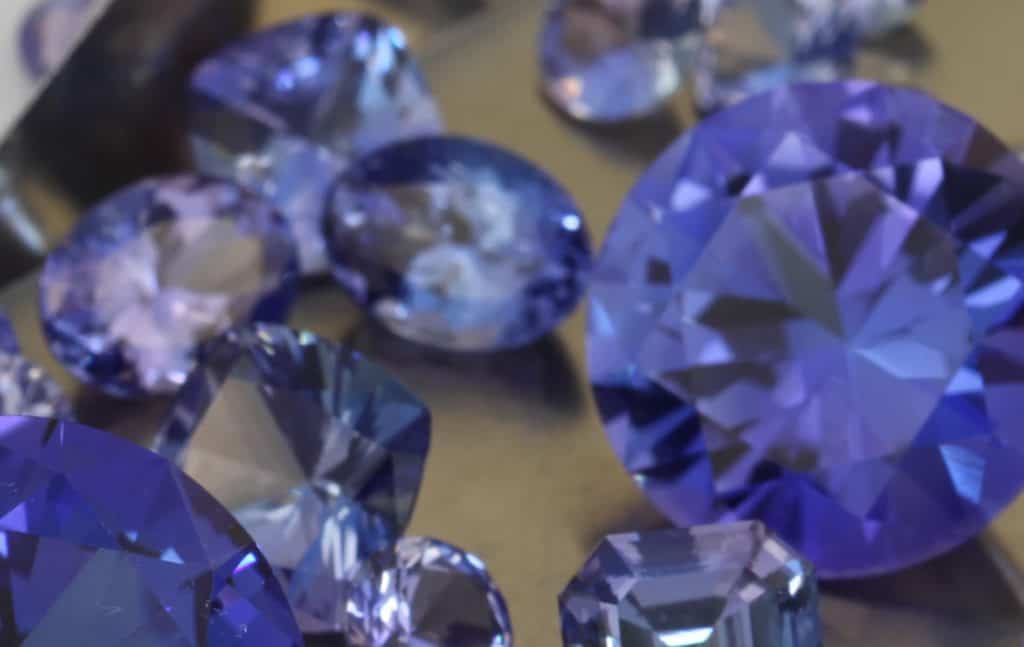 A Short History About Tanzanite

Tanzanite is believed to have been formed about 585 million years ago but was only discovered by Manuel de Souza in the Mererani Hills of Manyara Region in Northern Tanzania in 1967.

In its natural state, zoisite is rarely blue. The blue colour of zoisite is achieved by heat treating brown zoisite to a temperature of 600 degrees Celsius for about 30 minutes. That is 6 times the temperature of boiling water!

Tanzanite was discovered for commercial purposes in the 1960s and within a short time, it had gained popularity and became the second most popular blue gem after sapphire. Apart from its unique beauty and characteristics, people purchase it because it has a much lower price compared to other gems.

Tanzania is the only world’s known source of the rare blue gemstone. The gemstone was given the name 'Tanzanite' by Tiffany & Co. who named it after Tanzania, the country in which it was discovered. Tanzanite was discovered in, and is to-date, mined in the Mererani Hills near the foot of Mount Kilimanjaro.

Are all blue gems Tanzanite?

The answer is no. Users are advised to be careful when looking to buy Tanzanite online, as there are other blue gems in the commercial markets. Colour alone should not be a determining factor in buying Tanzanite. Other blue gemstones include aquamarine, topaz, and sapphire.

On top of that, Experts in gemstones came up with the Four Cs in which most gemstones are graded upon. Be sure to request information on the gemstone from the seller so you can check if they fit the Four Cs. 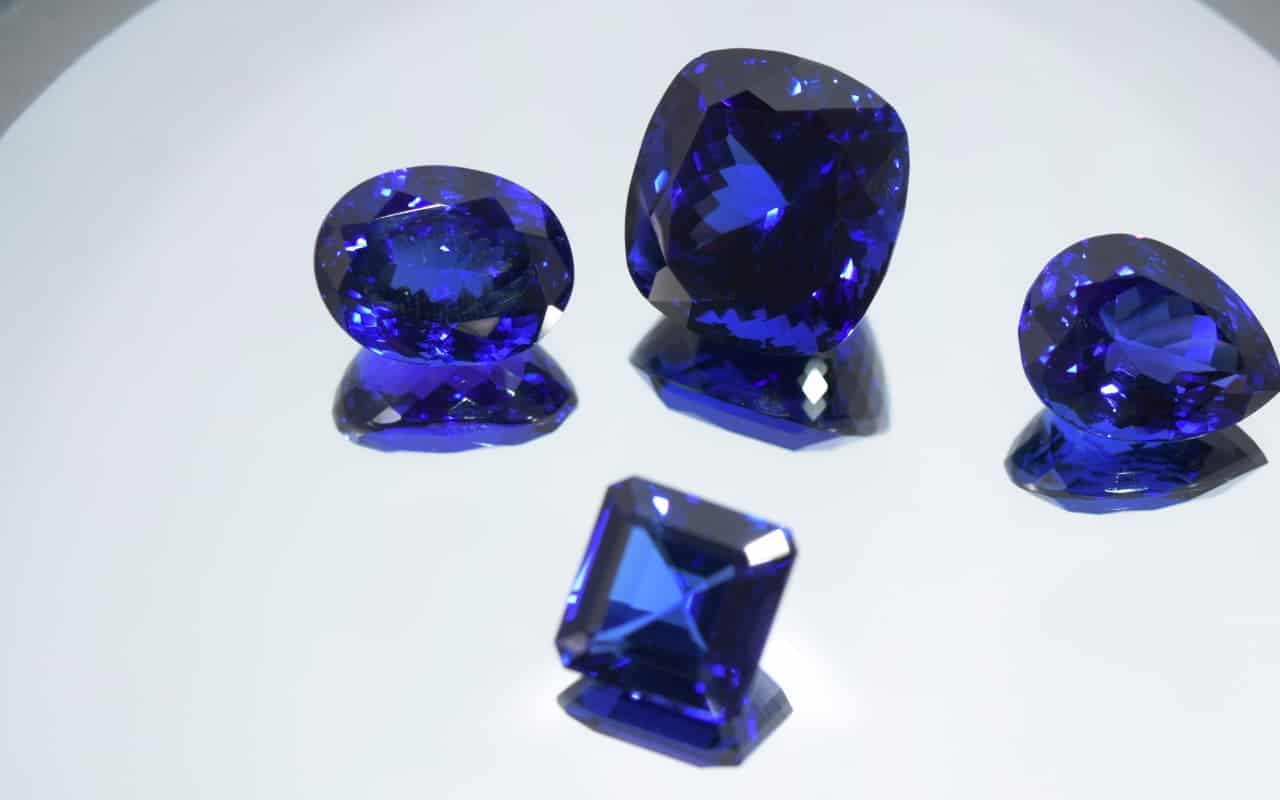 What are The Four Cs of Tanzanite?

Colour refers to the hue of the stone and the degree of colour saturation. Unlike in diamonds, colour in tanzanites is the most significant feature. The blue in a Tanzanite is valued in terms of hue, tone, and saturation. Clear, deep blue-violet Tanzanites are valued more than dusky ones.

Tanzanite is a pleochroic gem, which means that it can seem to have different colours when viewed in different angles.

Most people know Tanzanite in its bright and intense blue colour. However, in some cases, Tanzanite can display intense violet with red flashes of colour due to the gem’s strong pleochroism characteristics.

Tanzanite obtains its blue colour as a result of heat treatment, which is what reveals Tanzanite’s pleochroic blue and violet colours. Heat-treatment can occur naturally through the natural-heating process within the earth before the gem is mined.

Only a small amount of Tanzanite has a naturally-produced blue colour through the heat of metamorphism. These naturally blue gems are more valuable and held in high regard by both gemstone buyers and sellers.

Tanzanite can also be man-heated which seems to be an acceptable practice in order to achieve the famous blue colour of the gem.

How do I know if Tanzanite has been heated or not?

Determining whether Tanzanite has been heated or not has proven to be a challenging task. Most professionals are also under the assumption that the majority of the Tanzanite in the world has been heated in one way or another.

An honest seller will disclose if the gem has been heat-treated. Heat treatment has a significant effect on the stone's value. Don't worry the Tanzanite quality won't be affected by it.

As with most coloured gemstone, the deeper the colour, the higher the value. Untreated Tanzanite is typically brownish in colour, and while they are not considered to be the best there is, many people who prefer softer colours will gladly go for the softer coloured Tanzanite.

The advantage of a heat-treated Tanzanite is that it holds its colour and is unlikely to fade under normal light and temperature exposure.

Like Diamond, the clarity of Tanzanite is graded ranging from Internally Flawless (IF) to Included. Below are known clarity grades of Tanzanite:

Why does clarity matter?

Think of inclusions as wanna-be-cracks in a gemstone. They put the gem at risk of developing cracks and eventually resulting in breakage. This can lower the value of a gemstone greatly. It is only logical that high gemstones with higher or perfect clarity are more rare and valuable.

For Tanzanite and other coloured gemstones, unlike in diamonds, the concern is mostly placed on whether the inclusions are visible to the naked eye. There is less regard to the number of inclusions visible under the scope.

The Gemological Institute of America (GIA), classifies tanzanite as a Type I gemstone, which means it is usually flawless to the naked eye. This means that a Tanzanite with flaws visible to the eye is quite rare to find and will be lower in value. Most of the Tanzanite sold for jewelry has inclusions that can only be seen under magnification

The Cut refers to how the tanzanite has been shaped to optimize its beauty. Cutting has an effect on what colour the consumer will see afterwards.

This makes cutting a thorough and precise procedure as it may affect the colour/beauty of the product, thus its value.

Deciding how to cut a Tanzanite is making a financial decision by itself. A cut has an impact on colour and some weight might be lost in the process. Those two factors, colour and weight are considerable factors in determining the value of Tanzanite. 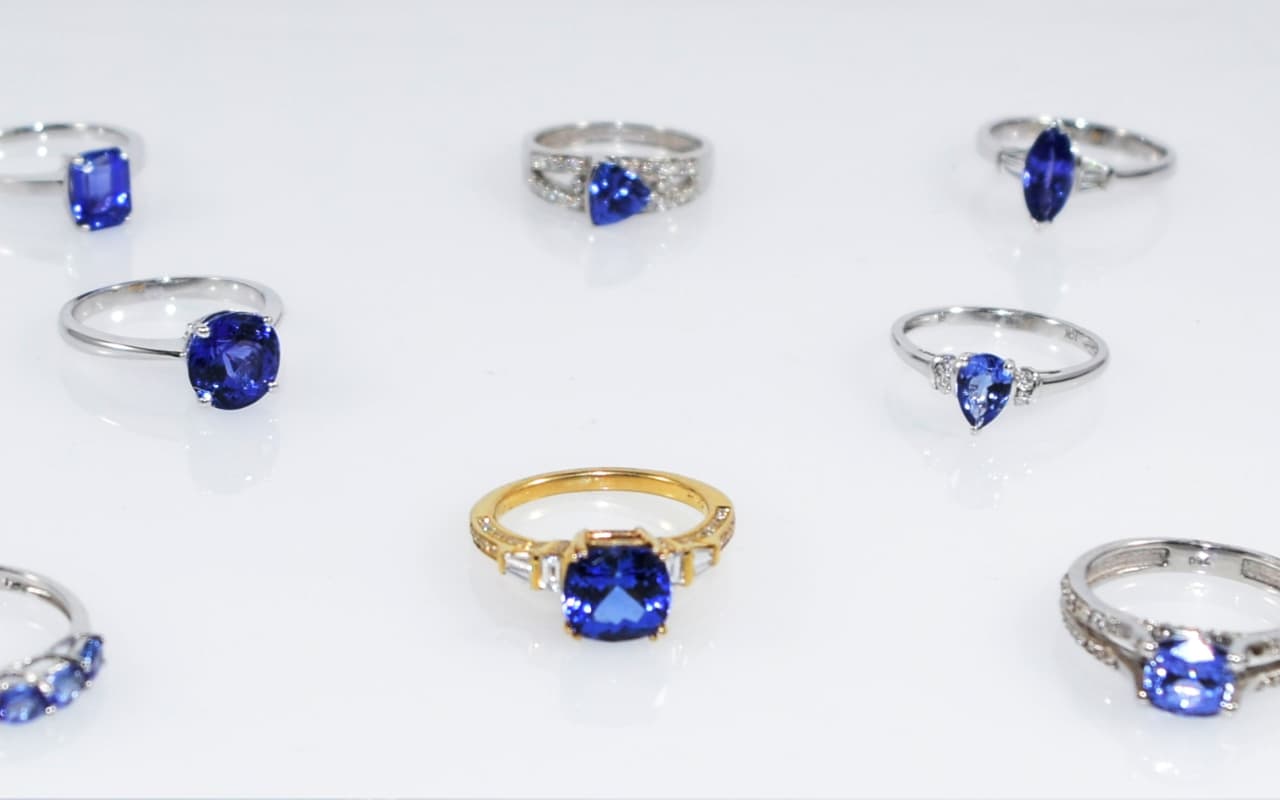 Tanzanite is measured in terms of Carat Weight. One carat has 100 points and weighs 1/5 of a gram. Naturally the higher the carat, the higher the cost. If a Tanzanite is larger in size and its colours and clarity are optimum, its value grows even further.

The weight of Tanzanite stones varies depending on the stone’s depth. “Face up” measurements (length x width) are the best way to measure a Tanzanite’s visual size.

Tanzanite is available in a wide variety of sizes. The finest and deepest colours are usually seen in sizes over 5 carats. Smaller stones are often less intense in colour. For instance, if you have two stones of equal saturation, the larger one will have a richer colour.

Smaller stones are more available than larger Tanzanites. The most common faceted Tanzanites are under five carats and are widely used in commercial jewellery. Stone over fifty carats are available but rare and those with top-colour grade often end up in custom or designer jewellery.

What Other Factor to Consider when Buying Tanzanite Online?

Shall you buy a loose stone or Tanzanite Jewellery? Tanzanite can be bought as a single stone or as jewelry. The choice is yours. The advantage of buying loose stones is that you have more freedom of buying sets of stones that you can use to create sets of jewelry as you wish. Or maybe you just want to keep the stones as an investment.

While tanzanite is undoubtedly beautiful, it can also be very delicate and not suitable for all uses. Tanzanite is best used in jewelry items that will not encounter abrasion and impact such as earrings and pendants. Tanzanites may not be suited for rings especially if you intend to wear the ring on a daily basis, best to leave the ring for special occasions. To reduce abrasion and impact, select jewelry whose design is set to protect the stone.

Watch out for Imitations

Tanzanite is no exception when it comes to imitations. A few manufactured materials such as synthetic forsterite (a mineral in the olivine solid solution series) have a similar appearance to tanzanite. Others include Coranite; synthetic blue corundum that resembles tanzanite, Tanavyte; a purple yttrium aluminum garnet and some blue glass has also been used as a tanzanite imitation.

Imitation materials cannot legally be sold as "tanzanite." They must be labeled in a way that gives the buyer a clear understanding that the item being purchased is not natural tanzanite - it only "looks like tanzanite."

Luckily, there aren’t any synthetic Tanzanites (yet). Seeing how the world will be short of Tanzanite in a few years, it is only expected that someone out there will figure out a way to make Synthetic Tanzanite. When we get to that stage, you may want to check if you are getting an original Tanzanite or a synthetic one.

Some coatings of cobalt have been applied to some pale-coloured tanzanites to improve their colour. An experienced jeweler should be able to recognize coated Tanzanite and inform the buyer accordingly. But don't take chances, add coating to your list of questions to the seller to be sure. 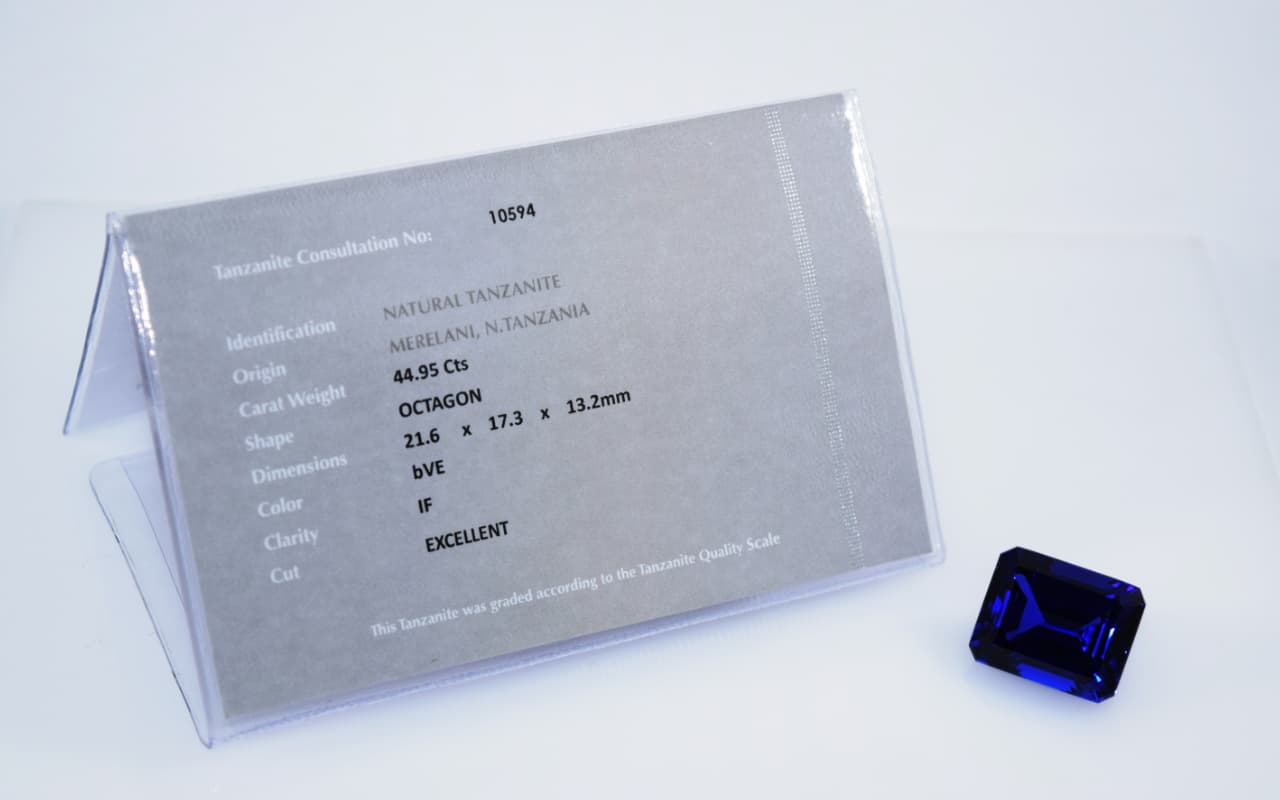 Unless you are okay to buy an heirloom a.k.a a second hand Tanzanite, ask for Tanzanite whose origin is Tanzania. Well, this should be simple, given that the only source of Tanzanite is Tanzania.

This is important when buying tanzanite online. Be sure to check the return policy in case what gets delivered to you looks nothing like what you saw online.

Metal preference can also affect the cost. Usually, 10K gold is lower priced than 18K gold; both yellow gold finish, as well as white gold. The colour of a tanzanite is always enhanced by white gold. If you are choosing Tanzanite and diamond jewellery, choose diamonds of a lower colour and tip the costs. Such small diamonds don’t need certification necessarily.

If not sure, Build your own.

If you prefer Tanzanite jewelry over loose stones, a great way is to customize your design online. Most sites offer to customize jewelry, and you can choose the tanzanite and its accompanying gold/diamond according to your budget.

How to Read a Tanzanite Certificate

A reputable dealer will always offer Tanzanite with a certificate of Authenticity. In this guide, we'll help you read one of these certificates.

50 years of Tanzanite; All You Need To Know About This Rare Blue Gemstone

Tanzanite has been admired and sought after for quite some time now. In this article, we cover the history behind this rare blue gemstone.

Is Tanzanite A Good Investment?

Tanzanite has grown popular in recent times as a possible source of investment. The blue gemstone has a certain quality that makes it seem like the perfect investment .asset; it’s rarity.

Our Collection
JOIN US
Blog